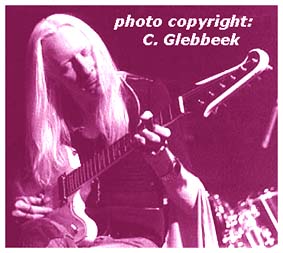 On Friday 16 August 1991 I interviewed Johnny Winter for The Guitar Magazine, with Johnny phoning from his management's NYC office. The interview centred on Johnny's career, his new album and his recent work with John Lee Hooker, but Johnny's enthusiasm and amicability stretched the scheduled 45 minutes to a generous 90 minutes, enabling a wider range of topics to be covered. The following is what Johnny said regarding Jimi:

UV: When did you first meet Jimi Hendrix?

JW: I met him at The Scene club that my manager Steve Paul had in 1968. Jimi was always at The Scene when he was in New York and we played many times together. He was just everywhere - he went out and jammed everywhere he was. There was a club called Thee Experience in Los Angeles where he always went when he was there - no matter where he went he would go out and play with whoever was around and do a lot of recording with other people, just recording the jamming. They would be down at the club all night and then whoever was sober enough he would bring back to the studio at the end of the night - you know, he really did like to play!

UV: What was your impression of Jimi as a person rather than as a musician?

JW: I never really got to know Jimi as a person. He was always involved in music and never talked about anything 'serious' [okay, we know what he means! - D.N.]. We talked about music and that was it. He didn't seem like a very open person as far as talking about his problems and things like that...he would never say, "Hey man, I really don't feel good today." He would just keep to himself if he didn't feel good. I'm sure he had a lot of people he was closer to than me that he did talk to, but he just didn't seem to be that open a person except about music and that was what he did, you know. I don't know what he was like just as a person.

UV: You recorded at The Record Plant with Jimi, Stephen Stills and Dallas Taylor [see Electric Gypsy, page 364]. What do you remember of that?

JW: Yeah, well, I recorded at The Record Plant with Jimi and I played with Dallas and Stephen at The Scene but I don't think they were on the record though. I don't think they were at the studio but I'm not real sure - it's been a long time! [note: Stephen Stills confirmed that the session at The Record Plant was with Jimi, Johnny, Dallas, and himself - C.G.].

UV: You recorded Guitar Slim's "The Things I Used To Do"...

JW: Yeah, we did. That just came out on [Lifelines]...oh...I've got it on cassette, there are four cassettes, a whole lot of things he did in different ways and some stuff that hadn't been released before. It's a kind of interesting bunch of tapes and "The Things I Used To Do" was on that. It was okay for an impromptu kind of jam.

UV: You're sometimes credited as playing on a Jimi Hendrix bootleg called Sky High along with Jim Morrison and others - playing "Red House," "The Sunshine Of Your Love" and several other songs [see Electric Gypsy, page 564]...

JW: Oh, I never even met Jim Morrison! There's a whole album of Jimi and Jim and I'm supposedly on the album but I don't think I am, 'cause I never met Jim Morrison in my life! I'm sure I never, never played with Jim Morrison at all! I don't know how that [rumour] got started.

UV: You were at the Band Of Gypsys concert at the Madison Square Garden on 28 January 1970 where Jimi walked off stage [see Electric Gypsy, page 413]. What did you think was wrong with him?

JW: I dunno. I heard all kinds of things like he took some bad acid...who knows?! I was there that night and it was real obvious that something was wrong. I really don't know if it was drugs or he just had a bad night, but it was really scary. I don't have the faintest idea what it was but it was one of the scariest things I ever saw.

UV: Can you remember when you last saw Jimi?

JW: No, I sure can't. He was around pretty much all the time. I was always running into Jimi some place but I really don't remember the last time.

JW: I think he would have definitely done better things. I've never seen anybody who loved to play more than him and he always had some kind of an idea. I don't know whether it would have been in a commercial way or he might have come up with something very strange but he was always up with new ideas. I think if he had lived he would have stayed as great as he always was. He would have probably had to go through some pain to do it but I'm sure things would have been okay.

First publised in UniVibes #4, November 1991; re-published in our Best Of UniVibes book.