Who's Your Daddy?: Think Rolling Stone magazine invented rock criticism? Think again. On 30 January 1966, the first issue of Crawdaddy!, cover-dated 7 February 1966, rolled off a mimeograph in Brooklyn, New York, the brainchild of then 17-year-old Paul Williams. "The Magazine of Rock," as it was known, had an initial run of 19 issues between 1966 and 1968, with contributions from the likes of Peter Guralnick, Jon Landau, and Richard Meltzer. Williams relinquished the reins of Crawdaddy! in late 1968 and went on to pen acclaimed books about Brian Wilson, Neil Young, and Bob Dylan. Dormant for years – its run under other publishers ended in May 1979 – the mag was revived by Williams in 1993 as a quarterly newsletter (now "The Magazine for Music Lovers"; for more information, visit www.cdaddy.com). 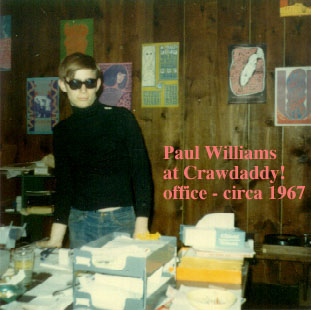 The piece, mostly presented in Q&A form, resulted from a JHE & Co. press reception titled 'The British Are Coming' on 30 January 1968 at the Copter Club in Manhattan. However, most intriguing is the revelation in Williams' introduction to the excerpts from issue 9, May 1967, in The Crawdaddy! Book, where he recounts how Jimi was a fan of the magazine and notes that he would sometimes hang out with the staff in their office in Greenwich Village! With all this in mind, I engaged Paul Williams, now residing in San Diego, California, in the following interview about Jimi Hendrix on 3 October 2002.

UniVibes: When and where did you first hear his music?

Paul Williams: Sometime in [June] 1967, after reading the excited reports in the UK music papers, I bought "Purple Haze" b/w "The Wind Cries Mary." And I was delighted, absolutely thrilled, with both sides.

UV: When and where did you first see Jimi?

PW: When he first came back to the US, he played a residency [20 July, 3-5 August, and 7-8 August 1967, respectively] as the first headliner at a new club called Salvation, which was underneath 1 Sheridan Square, NYC – and a block away from the Crawdaddy! office. I believe I first met him after watching him and the Experience rehearsing at Salvation. That same week, he came over to the Craw office a few times to hang out (I think at the invitation of Sandy Pearlman). My impression watching him and the JHE rehearse and then do sets at Salvation was that I immediately understood what the hysteria in the UK press was about. This was fabulous rock and roll. Even "Like A Rolling Stone" was made fresh and new (and passionate). At the office, my impression was that he was a shy and incredibly sweet person. He had a great sense of humor and was very sincere for a rock star – especially a very young and new rock star. Of course, he wasn't a star yet in his homeland...and in August he hung out in our office quite a bit because it was a block away from Salvation and because we were his age and had similar tastes in music and dope. The Crawdaddy! staff were already crazy about Jimi's UK singles, which we bought at the House of Oldies on Bleecker Street; and we were of course blown away by his live act, and caught as many of the Salvation sets as we could.

PW: My favorite is still the first, Are You Experienced, and almost every song on it, though I'll give "Foxy Lady" special notice. My book Rock and Roll: The 100 Best Singles (2nd edition, 1983; Entwhistle Books, US $12, ISBN 0-934558-36-1) includes an essay [on page 133] about Jimi's version of "All Along The Watchtower" [which comes in at #56; the list is presented chronologically]: "This [the JHE] is a new sound under the sun, obviously and inescapably Something Else, from first listen till the very end of time. Jimi Hendrix's music, especially his guitar-playing, takes off in directions other folks can't even point toward."

UV: How do you feel about Jimi's ongoing musical legacy? Will his music stand the test of time?

PW: Yes, it absolutely stands the test of time and will influence new music for many generations to come. The proof of this is that even today, as has happened for decades, when teenagers start playing electric guitar, they almost inevitably discover Hendrix's music and become huge fans of it. It remains fresh and original and fascinating and continues to have a powerful influence on every new generation of rock guitar players.