Originally recorded by French radio with very basic equipment, the Paris 1968 CD on Stages shows the JHE in a transitional phase moving from the controlled conciseness of the Stockholm 1967 CD to the expansive looseness of the San Diego 1969 CD.

Jimi takes the stage with an short unaccompanied 'doodle'. Sounding relaxed and already warmed-up (this is the second show of the evening) Jimi tests the sound and feedback possibilities with a plaintive raga-like melody in A minor, the same key as the band's opening song. After a 1,2 count-in Jimi leads the band into their incendiary version of Howling Wolf's classic "Killing Floor." Whilst the conservative (small 'c'!) and cantankerous Mr. Burnett would probably not have approved of Jimi's version, the JHE strip down this song to the bare essentials making it undoubtedly less subtle than the original but a whole lot more exciting and 'in yer face,' as some might say.

Jimi plays a medium-paced combined accompaniment and lead intro creating the illusion of two guitars. Taken at a slightly less frantic pace than the Monterey performance, Mitch (keen as ever) punctuates the intro with some drum fills which almost sound like false starts. Adapting the song's ascending riff into a descending, meaner-sounding riff, the Experience plough their way through this song showing the audience they really mean business.

At the beginning of the second verse of Jimi's solo Mitch and Noel pull-off a drop in the rhythm section which works well but the effect is slightly spoilt by the muddy sound quality. In the third chorus of the solo Jimi really takes off with the horse's neigh feedback (well, that's what it sounds like to me!) that can also be heard at the end of the song.

After a brief tune-up Jimi leads the band into Muddy Water's "Catfish Blues." It is a good, straightforward craftperson-like reading. Unusual for a song only second in the set, this contains Mitch's drum solo. This is one of the last performances of "Catfish" which Jimi gave as he would shortly incorporate elements of it into his own/www/img/JimiinParis68.jpg "Voodoo Chile" composition and its value as a vehicle to explore his Blues roots would soon be superseded by the new, extended form of "Red House" with Noel on bass instead of guitar as featured in concerts during the following months.

Jimi's between-song banter shows him to be in a jovial mood as he jokes about the groovy tune called "Tune-up Time." After requesting the audience to be as "quiet as bunnies," Jimi begins the mounting feedback of "Foxy Lady." Teasing the audience with a long build-up this version is far less restrained and far more raunchy than that from the Stockholm 1967 CD.

One of the (few!) mundane aspects of listening to a complete Jimi Hendrix concert is the amount of time spent tuning up. Jimi was pretty hard on his guitars and musical instrument technology wasn't as refined as it is now so it was inevitable that there would be some tuning problems but the listener can't help feeling that the flow of a concert is hindered by this necessary but frustrating musician's ritual. 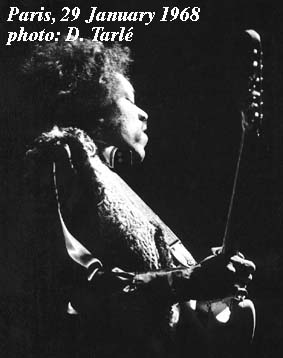 "Red House" features Noel on 6-string guitar as did the original album track on Are You Experienced. Form-wise this version stays pretty close to the studio recording and Jimi even reproduces some of the licks, but overall it sounds a little constrained. Noel's guitar accompaniment, played here on on Keith Richard's Les Paul gold top, worked well in the studio but when played live his thick tone (cause by turning the tone control right down to provide plenty of 'bottom end,' as us musicians like to say) sounds a little leaden. This was almost certainly the last time Noel played "Red House" on a 6-string guitar. When Noel moved back onto bass, the song had taken on a whole new feel, slower, longer, more exploratory and with far more dynamic range in volume. Unfortunately, perfectly adequate performances of "Red House" with Noel on 6-string guitar suffer in comparison to later performances - not because the playing is bad or uninspired but because the form is too rigid to allow Jimi to stretch out.

"Right now we would like to try to do thus, eh, instrumental for you just for a second, you know" says Jimi over Mitch's into to "Driving South." Well, excuse me, but this sounds more like 8 1/4 minute worth to me! "Driving South" is a simple, riff-based one chord jam (it only changes chords for the break) stretched out by the variations in the dynamics and extended interplay between the band members. The intro theme features some interesting muted rakes from Jimi and when he moves into the solo which follows he quotes licks from "Rock Me, Baby" and "Tax Free" (which the JHE had recorded at Olympic Sound Studios in London very recently). In the middle section Jimi taps a percussive part on his strings which Mitch imitates on the drums. The jam ends with some furiously tremolo-ed high register Steve Cropper-style double stops of 6ths.

Exhilarated by their lengthy jam, the following tuning up session incorporates a spontaneous ten second version of a supposed Elvis rocker, then the playful mood changes completely for a reflective, sincere reading of "The Wind Cries Mary." Unfortunately one of Jimi's strings is slightly out of tune which is more noticeable in a quiet, clean guitar-sound track like this.

Changing the mood again, the JHE go into a high-energy performance of "Fire," one of the two tracks to appear on all four of the Stages CDs ("Purple Haze" being the other song). Mitch breaks the snare drum skin during the guitar solo but he keeps the beat on the high-hat, then fakes it on the tom-toms to the end of the song.

After a brief pause to change the snare drum the band goes into "Little Wing," this being the longest known recorded version with three choruses of gorgeous soloing at the end using double and triple stops. The studio version on Axis: Bold As Love always sounds tantalisingly short and frustratingly fades out during one of Jimi's most poignant solos - here in Paris Jimi sounds totally relaxed and inspired. Yet again though, there's a slight tuning problem - oh well: c'est la vie as the audience might have said!

The final tune of the evening is "Purple Haze," opening with some tremolo arm excesses and a feedback/noise solo, the JHE perform this song at a more sedate and smouldering tempo than later versions presented on Stages. Noel's "oooh's" and "aaah's" sound a little self-conscious (as well they might!) and by the time we get the final verse -would you believe it?!- Jimi's 6th string is flat.

The Paris 1968 CD shows the Jimi Hendrix Experience growing in confidence and Jimi himself beginning to stretch out and take chances, more and more relying on the mood of the moment and his inspiration to take the songs into places they have not been before.